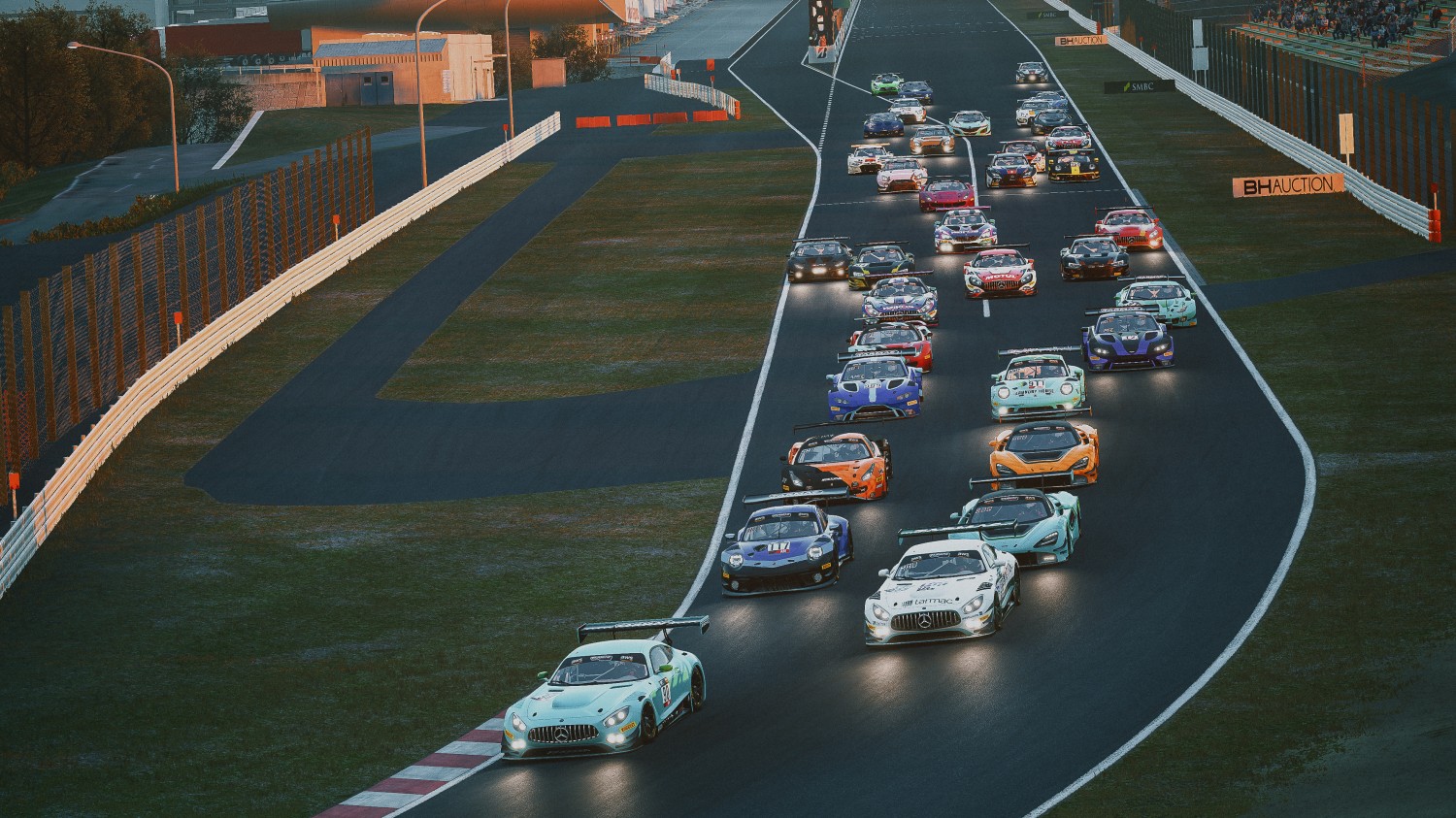 History was also made in the Sim race where Mia Rose (Privateer, Aston Martin) became the first woman to win an SRO Esports event outright. What’s more, she was followed home by Boquida (Laundry House, McLaren) who made sure of the AM title by finishing second overall.

Team-mate Andrew Laurenson (Porsche) picked up the Pro win in third overall while fourth in class was enough for Andika Rama Maulana (Legion of Racers, Mercedes-AMG) to wrap up the Sim-PRO crown.

An early coming together between the front row starters set up a fascinating first race at Suzuka where the same incident left Sim-PRO champion-elect Andika Rama Maulana playing catch up while giving Philippa Boquida an easier route to the AM class title.

Maulana’s contact with pole-sitter Karl Petersen effectively ended the AM championship contender’s chances but also resulted in a drive-through penalty for the PRO points’ leader, who dropped down the order as a result.

It also elevated Boquida into the overall race lead, a position she would comfortably maintain until serving her mandatory pitstop after 40 minutes. Her progress thereafter suggested the Australian would comfortably re-take the place once the stops had shaken out, but that didn’t account for Mia Rose whose pace and faster pitstop helped her jump from third to a net first late on.

She duly cruised to her second Sim-AM class win and first overall victory of the season ahead of Boquida who was happy to take no chances in securing the title.

An early pitstop meant Andrew Laurenson’s true position didn’t become clear until the final 15 minutes when, one by one, the Laundry House Porsche picked off the late stoppers. Like Rose, he also came through to claim a second PRO class victory of the campaign ahead of Kelvin Chen whose 911 remained a top-five contender throughout and rounded off the AM podium.

Behind, PRO’s championship rivals took the chequered flag together, albeit with Kin Long Li just ahead of Maulana who worked his way back to the front after serving his penalty. In any case, Li wouldn’t have scored sufficient points to overhaul the Indonesian.

60 minutes of fluctuating fortunes for the PRO title contenders summed up the Real race at Suzuka where Dan Wells claimed victory and Duvashen Padayachee wrapped up the championship.

However, Jasper Thong’s lap one collision initially threatened to derail Padayachee’s title tilt almost before it began. Having started third – right behind championship rival Moh – the Tarmac eMotorsports Mercedes-AMG was down to eighth and stuck amongst traffic. A second incident 10 minutes later only compounded matters and, whether planned or on a whim, it sent the Australian diving for the pits.

Back at the front Moh didn’t quite have the pace to live with Wells but was content that, as things stood, he would be crowned champion. Indeed, it wasn’t until the final 15 minutes that a seemingly re-focused Padayachee began picking off the late stoppers to put himself back into the title mix.

Every place gained inched him closer to Moh’s theoretical points total. Fifth in class would leave him a point shy, but one more spot would be enough to overhaul the Craft-Bamboo Mercedes-AMG. The top-two were, by then, too far clear to be caught. But the late-stopping Matt Solomon, Evan Chen and Tengku Djan Ley all provided hope.

Sure enough all three emerged behind Padayachee who swept through to complete the Real overall podium and seal the PRO title by four points.

Solomon – whose class was incorrectly marked as AM – came home fourth ahead of the genuine AM class winner Kevin Tse who finished a fine fifth overall. It was also more than sufficient to wrap up the championship after his only rival, Billy Lo, endured a tricky race.

Chen wound up sixth after stopping late while Kang Ling recovered from a meeting with 130R’s barriers to finish seventh. Ley, Matthew Marsh and JiaTong Liang completed the top-10.

Antares Au was second in the Am class (and 12th overall), while Lo completed the class podium down in 18th overall.