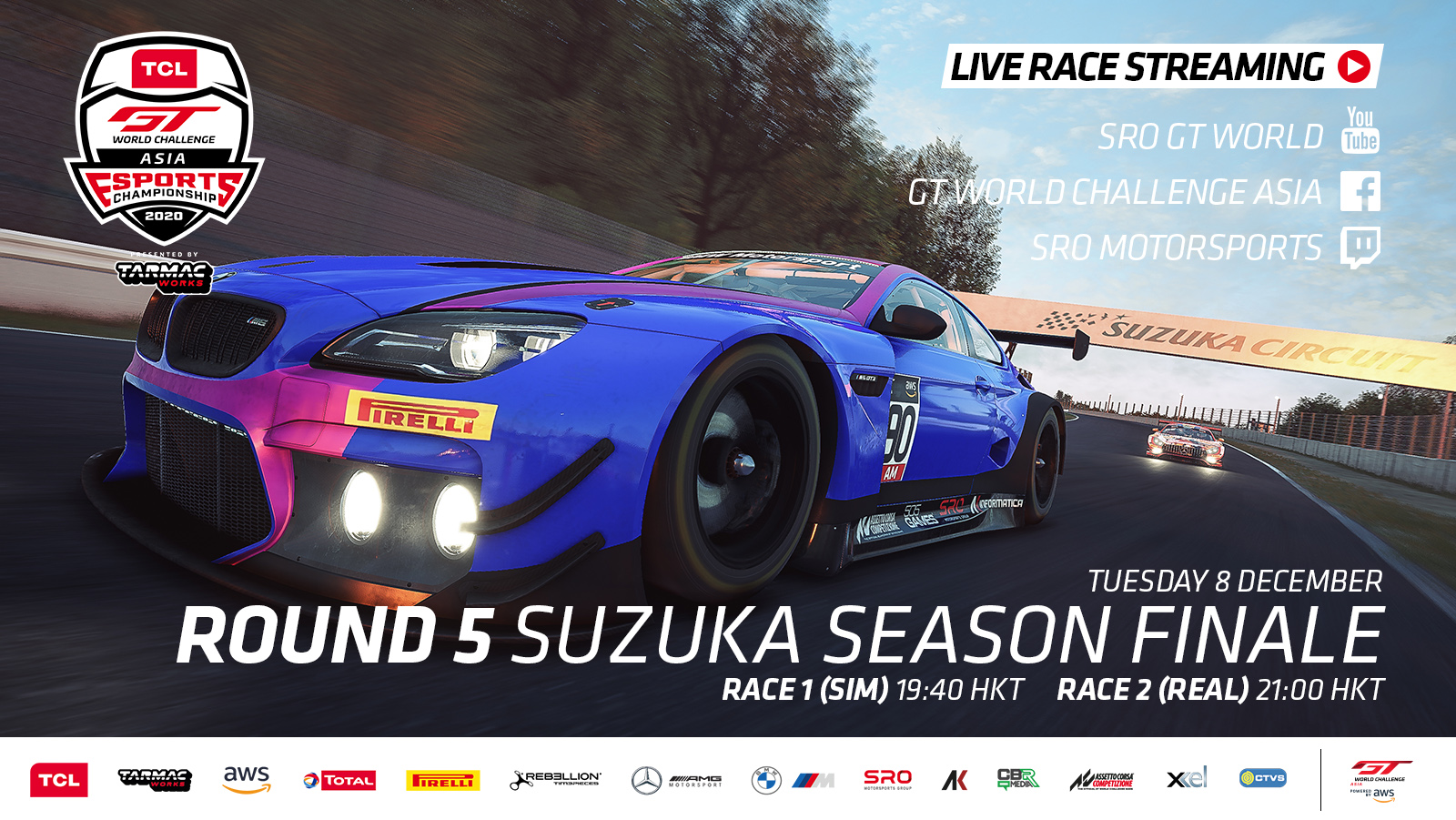 The world’s best-known figure-of-eight racetrack also represents one of the greatest challenges in Assetto Corsa Competizione – the official game of GT World Challenge Asia Powered by AWS. A fitting choice, then, for a championship showdown in which a total of 13 drivers could win one of four class titles.

Two wins from the first two races offered Duvashen Padayachee a chance to wrap up the Real-PRO crown two weeks ago at Spa-Francorchamps. Instead, events in the Ardennes conspired against the Tarmac eMotorsports driver whose sudden internet outage resulted in early retirement and a chance for others to close the gap.

Melvin Moh failed to take full advantage but still finds himself seven points adrift with 25 to play for. Should the Craft-Bamboo Racing driver claim his second victory of the season and Padayachee finishes runner-up, the pair will tie on points as well as four of their five results across the season. In this instance Moh’s 11th place at Monza would trump Padayachee’s Spa DNF, handing the title to the Malaysian.

Aaron Borg would, ordinarily, also be in contention after winning at Spa-Francorchamps. However, personal circumstances have forced the SRT Team Sydney driver’s withdrawal.

Further back, Kang Ling (Climax Racing, Lamborghini) could yet finish on the same total as Padayachee but would lose the title on countback, two victories to one.

Another potential front-runner without a championship to fight for is Dan Wells (Leipert Motorsport, Lamborghini) who might have won at Spa without incurring a time penalty. He also claimed pole for Suzuka’s Charity Cup event earlier this year when he was beaten to victory by Evan Chen whose Laundry House Porsche should also feature near the sharp end on Tuesday.

The Real-AM class battle is a little more straightforward thanks to Kevin Tse’s 13-point advantage over Billy Kai Fung Lo. Should the Audi Sport Asia TSRT driver claim a third victory of the campaign, his Craft-Bamboo rival could still claim the title by finishing anywhere else on the podium. The same scenario, albeit with the latter finishing fourth, would be enough for Lo to win on countback.

Lo’s recent form suggests a third-straight win shouldn’t be discounted. However, Tse’s consistency – two wins and two second place finishes – make him a clear favourite to lift the title at Suzuka where he also finished third in the pre-season Charity Cup race.

Antares Au (Modena Motorsports, Porsche) and Nan Lin (Toro Racing, Mercedes-AMG) both finished ahead of Tse on that occasion but have failed to beat the Hong Kong driver ever since.

SIM: MAULANA ON THE CUSP; BOQUIDA LEADS SEVEN-WAY AM SCRAP

19 points clear with only 25 available: there’s no doubt that Andika Rama Maulana holds all the aces heading to Suzuka where his only Sim-PRO championship rival, Kin Long Li, must win to have any chance of upsetting the significant odds.

There’s no doubting the latter’s consistency, but that now has to make way for speed if he’s to beat the Legion of Racers Mercedes-AMG ace who heads to Japan with two wins from his last two outings.

Nevertheless, should the Wako’s Fliptable Racing Mercedes-AMG honour its side of the bargain then Maulana would only require seventh place and the six points that go with it to win the title on countback.

Behind, Andrew Laurenson (Laundry House, Porsche) has failed to hit the same heights since winning at Laguna Seca but can cement his third place – and potentially overhaul Li – with a decent result on Tuesday.

But while the PRO class appears all-but settled, there’s nothing straightforward about the Sim-AM title fight, which features seven drivers covered by 23 points.

Non-scores at Spa for Philippa Boquida (Laundry House, McLaren) and Karl Petersen (Laundry House, Mercedes-AMG) helped Ryan Hoolihan (Privateer, McLaren) make it a top-three now covered by just four points. All can clinch the crown with victory regardless of their primary rivals’ results.

Next up is Spa’s class winner Ferris Stanley who has vaulted into title contention following a slow start. The Laundry House Ferrari lies 12 points adrift of Boquida but nine clear of team-mate Terry Rayton (Lamborghini), while Mia Rose (Privateer, Aston Martin) and Kelvin Chen (Privateer, Porsche) must also win to have any chance of overturning their deficits.

Both races will be livestreamed back-to-back on GT World Challenge Asia Powered by AWS’s Facebook page and SRO’s Youtube/Twitch channels later today at 19:40 and 21:00 HKT. The same coverage is also available with native commentary on Chinese digital platforms Huya and iQIYI.